How to become a member of theJSC

How to become a regular member of the JSC:

Member of the JSC can become every candidate to 18 years, who is accepted as a member of the CBA on the basis of the decision of t the President of the territorial section of the CBA. A condition for membership of the JSC is a completed registration form with the consent of legitimate representative sent to the association address: Czech Bartenders Association z.s., Šimáčková 704/135, 628 00 Brno, than acceptance of the Statutes and Code of Ethics CBA, payment of membership fee. Membership is not a legal title; the final word has the Presidium CBA adoption. If you are interested to join, first you have to register on-line (new member, bartender, barista) and then send a written application (in case you have already registered as a bartender, send only a written application). Membership is automatically annually restored by paying a membership fee. The membership fee must be paid in time of the 31 December of the previous year for which the contribution is for, or membership expires.
Each member has the right to participate in the JSC. Member of the JSC does not have the right to vote and be elected to bodies CBA. JSC member is not allowed to participate in the management of the CBA.

Membership fees are set at 1.000,- CZK per year. It can be paid via bank transfer or post money order to the CBA account number: 1935171379/0800 led by Czech savings bank. The first payment of membership fee is payable under a variable symbol that you specify in the application form (eg, birth number or date of birth). In the following years is as a symbol used a number of the member, which is before your name in the file Membership base, the www.cbanet.cz. 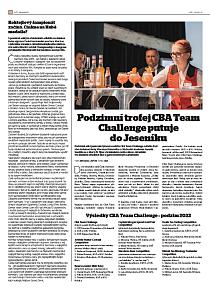